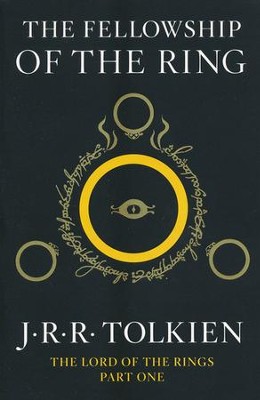 #1: The Fellowship of the Ring

▼▲
The beginning of the tale of Frodo's quest, picking up after Bilbo acquired the One Ring in The Hobbit, The Fellowship of the Ring masterfully sets up the epic journey he will embark upon to Mordor. Possessing a magic ring that must be destroyed in the fires of Mount Doom--lest the free people of Middle Earth fall--Frodo is helped in quest by Merry, Pippin, Samwise, and Fredegar, as well as those he meets along the way: Tom Bombadil, Farmer Maggot, Glorfindel, Strider, and other beings. 398 pages, softcover.

This text contains all revisions and corrections, and is based on the 1965/66 edition published by Houghton Mifflin.

▼▲
The first volume in J.R.R. Tolkien's epic adventure THE LORD OF THE RINGS
One Ring to rule them all, One Ring to find them, One Ring to bring them all and in the darkness bind them

In ancient times the Rings of Power were crafted by the Elven-smiths, and Sauron, the Dark Lord, forged the One Ring, filling it with his own power so that he could rule all others. But the One Ring was taken from him, and though he sought it throughout Middle-earth, it remained lost to him. After many ages it fell into the hands of Bilbo Baggins, as told in The Hobbit. In a sleepy village in the Shire, young Frodo Baggins finds himself faced with an immense task, as his elderly cousin Bilbo entrusts the Ring to his care. Frodo must leave his home and make a perilous journey across Middle-earth to the Cracks of Doom, there to destroy the Ring and foil the Dark Lord in his evil purpose.

▼▲
J.R.R. TOLKIEN (1892–1973) is the creator of Middle-earth and author of such classic and extraordinary works of fiction as The Hobbit, The Lord of the Rings, and The Silmarillion. His books have been translated into more than fifty languages and have sold many millions of copies worldwide.

"Destined to outlast our time." The New York Herald-Tribune

▼▲
I'm the author/artist and I want to review #1: The Fellowship of the Ring.
Back