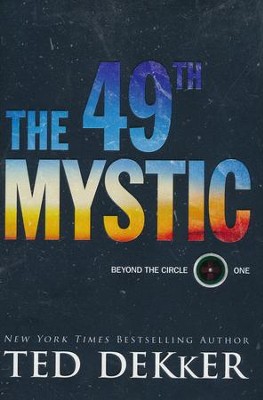 The operation to restore a blind girl’s sight fails, leading Rachelle to begin dreaming of another world. Now, in both worlds, she learns she is the prophesied one who must recover five ancient seals to save both worlds from falling into darkness forever. Part one of a two-volume saga.

▼▲
Some say the great mystery of how one can live in two worlds at once died with Thomas Hunter many years ago. Still others that the gateway to that greater reality was and is only the stuff of dreams.

They are wrong. In the small town of Eden, Utah, a blind girl named Rachelle Matthews is about to find out just how wrong.

When a procedure meant to restore Rachelle's sight goes awry, she begins to dream of another world so real that she wonders if Earth might only be a dream experienced when she falls asleep in that reality. Who is a simple blind girl to have such strange and fantastic dreams?

She's the prophesied one who must find and recover five ancient seals--in both worlds--before powerful enemies destroy her. If Rachelle succeeds in her quest, peace will reign. If she fails, both worlds will forever be locked in darkness.

So begins a two-volume saga of high stakes and a mind-bending quest to find an ancient path that will save humanity. The clock is ticking; the end rushes forward.

▼▲
Ted Dekker is the award-winning and New York Times bestselling author of more than forty novels, with over 10 million copies sold worldwide. He was born in the jungles of Indonesia to missionary parents, and his upbringing as a stranger in a fascinating and sometimes frightening culture fueled his imagination. Dekker's passion is simple--to explore truth through mind-bending stories that invite readers to see the world through a different lens. His fiction has been honored with numerous awards, including two Christy Awards, two Inspy Awards, an RT Reviewers' Choice Award, and an ECPA Gold Medallion. In 2013, NPR readers nationwide put him in the Top 50 Thriller Authors of All Time. Dekker lives in Nashville, Tennessee, with his wife, Lee Ann.