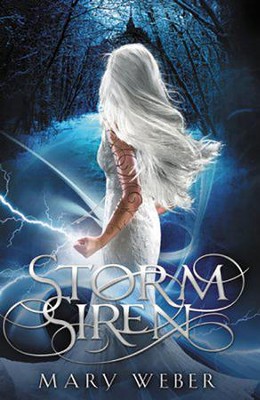 ▼▲
As a slave in the war-weary kingdom of Faelen, seventeen-year-old Nym isn't merely devoid of rights, her Elemental kind are only born male and always killed at birth---meaning, she shouldn't even exist. Standing on the auction block beneath smoke-drenched mountains, Nym faces her fifteenth sell. But when her hood is removed and her storm-summoning killing curse revealed, Nym is snatched up by a court advisor and given a choice: be trained as the weapon Faelen needs to win the war or be killed.

Choosing the former, Nym is unleashed into a world of politics, bizarre parties, and rumors of an evil more sinister than she's being prepared to fight . . . not to mention the trainer whose dark secrets lie behind a mysterious ability to calm every lightning strike she summons. But what if she doesn't want to be the weapon they've all been waiting for?

The award-winning novel that started it all.

"A riveting tale from start to finish. Between the simmering romance, the rich and inventive fantasy world, and one seriously jaw-dropping finale, readers will clamor for the next book—and I'll be at the front of the line!" —Marissa Meyer, New York Times bestselling author of the Lunar Chronicles

In a world at war, a slave girl’s lethal curse could become one kingdom’s weapon of salvation. If the curse—and the girl—can be controlled.

"I raise my chin as the buyers stare. Yes. Look. You don’t want me. Because, eventually, accidentally, I will destroy you."

As a slave in the war-weary kingdom of Faelen, seventeen-year-old Nym isn’t merely devoid of rights, her Elemental kind are only born male and always killed at birth—meaning, she shouldn’t even exist.

Standing on the auction block beneath smoke-drenched mountains, Nym faces her fifteenth sell. But when her hood is removed and her storm-summoning killing curse revealed, Nym is snatched up by a court advisor and given a choice: be trained as the weapon Faelen needs to win the war or be killed.

Choosing the former, Nym is unleashed into a world of politics, bizarre parties, and rumors of an evil more sinister than she’s being prepared to fight . . . not to mention the trainer whose dark secrets lie behind a mysterious ability to calm every lightning strike she summons.

But what if she doesn’t want to be the weapon they’ve all been waiting for? Set in a beautifully eclectic world of suspicion, super abilities, and monsters, Storm Siren is a story of power. And whoever controls that power will win.

"Intense and intriguing. Fans of high stakes fantasy won't be able to put it down." —CJ Redwine, author of the Ravenspire series

"Mary Weber has created a fascinating, twisted world. Storm Siren sucked me in from page one—I couldn’t stop reading! This is a definite must-read, the kind of book that kept me up late into the night turning the pages!" —Lindsay Cummings, author of the Androma Saga

"A riveting read! Mary Weber's rich world and heartbreaking heroine had me from page one. You're going to fall in love with this love story." —Josephine Angelini, internationally bestselling author of the Starcrossed trilogy

"Elegant prose and intricate world-building twist into a breathless cyclone of a story that will constantly keep you guessing. More please!" —Shannon Messenger, author of the Sky Fall series

▼▲
'Between the beautiful words used to create this fairy–tale world, to the amazing power of the elementals, to the aspects of slavery and war, I'd say this book is a must read for any fantasy lover. It's powerful and will keep you turning pages faster than you thought possible. I can't believe this is Mary Weber's debut novel. Congratulations!'
“Mary Weber’s debut novel reflects an author sensitive to her audience, a stellar imagination, and a killer ability with smart and savvy prose.”
“One of my favorite things about this novel is how the pace unfolds just like a storm. Whether that was the author's plan, given her lead character's fantastic abilities, or a crazy random happenstance, I don't know; but from the moment the reader meets Nymia on the auction block, a deep, threatening charge, held off only by Nym's grief, shame, and fear, begins to build. As the story progresses, you can almost sense the dark clouds growing, building the tension toward the ultimate storm. And when that thunderhead finally breaks? Look out! There is no escape. You are utterly drenched in the action, drama, emotion---and a few moments of calm-within-the-storm beauty and truth---before the lightning cracks again and blows the sky apart. “The last one-fourth of the novel will keep you white-knuckled, and raggedly emotional---yes, I cried!---as evil and betrayal, romance and regret, sacrifice and surprise take you right up to the final scene that will no doubt leave you, as it did me, gasping from that hanging cliff for the sequel that cannot come too soon. Don't miss this one!”
“Storm Siren is an interesting take on the recent trend toward titles with teens who discover they have superpowers. What is unique about Storm Siren is the setting for the release of these powers - somewhat medieval, with rich descriptions of the castle and countryside. Nym is seventeen when she realizes her power, still raw and untrained. Queen Adora wants her for defense, and quickly gets her into training with the handsome and enigmatic Eogan, a favorite of the queen. As an Elemental, Nym's gift is rare, especially since it is usually only passed on to male children from one or both parents. Faelen, Adora's kingdom, is in bad shape, having been at war for many many years. The only way to change this is to mount a lethal attack on Drust. Brother and sister Colin and Breck quickly befriend Nym, and Colin makes no secret of his attraction to her. Breck, who is blind, serves as Nym's chambermaid the confidante, helping her maneuver through the way of the royal court. But there are secrets connecting the two kingdoms, and not all of Adora's loyal servants are what they seem to be. Readers who enjoyed Marissa Meyer's Cinder series will enjoy this fast-paced fantasy which combines an intriguing storyline with as many twists and turns as a chapter of Game of Thrones!”
“In the kingdom of Faelen, ‘Elementals’ have always been male and killed at birth. With powers reminiscent of X-Men's Storm, 17-year-old Nym considers herself a monstrous fluke, tormented by guilt over her deadly abilities. After letting loose her powers in public, she becomes slave to petty Adora, who offers two unappealing options: execution or training as a weapon to save their kingdom. Life consists of being trussed up by maid and new friend, Breck, for parties populated with lusty, conniving members of the elite High Court and slightly less dangerous outdoor training by secretive and attractive Eogan, along with Breck's cheeky brother Colin, who literally moves earth. The heroes and plot come in to action in the last third of the book. A bittersweet ending teases happiness, but the rug is pulled from under Nym and readers alike in the final pages. The language is occasionally jarring, using a tone typical of medieval tales, with occasional quips or thoughts coming across as too modern. Nym is distinct while the other characters are archetypes. Still, this adventure, in the vein of 1980s fantasy films, has readers rooting for the heroes to smite the wicked baddies. Buy where fantasy flies.”
“Nym has been a slave for 14 different masters when a noblewoman named Adora buys her, although as an untrained Storm Siren in a kingdom that kills Elementals at birth, Nym is lucky to be alive. In her new home, Nym finds that Adora is one of the king’s advisors trying to stop Faelen from being invaded, and she plans to use Nym’s powers as a line of last defense against the armies of the body-snatching Draewulf. Meanwhile, Nym can’t stop thinking about Eogan, her trainer, whose touch brings a calm the likes of which she’s never experienced before. Nym’s struggles don’t exactly tread new ground, so fantasy readers will feel at home in Weber’s first novel. The romantic subplot falls a little flat, but a detailed backdrop and large cast bring vividness to the story. Nym’s friend and fellow magic-user Colin, for example, keeps the mood light with his good humor without being reduced to comic relief alone. The story takes a surprisingly dark turn as the narrative pieces fall into place for the next book in this planned trilogy.”
“Readers will easily find themselves captivated. The breathtaking surprise ending is nothing short of horrific, promising even more dark and bizarre adventures to come in the Storm Siren trilogy.”
“Weber builds a fascinating and believable fantasy world. Inventive and entertaining.”

▼▲
I'm the author/artist and I want to review #1: Storm Siren.
Back
Back