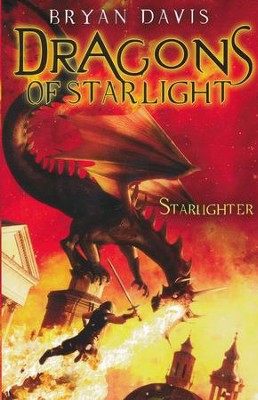 ▼▲
Jason Masters doubts the stories he's heard about humans being taken to another realm and enslaved by dragons -- until his brother suddenly disappears! Once through the legendary portal, he joins forces with a prisoner named Koren who's trying to destroy the "black egg of doom." Can they rescue the captives and save two worlds from annihilation?

What if the Legends Are True?

Jason Masters doubted the myths that told of people taken through a portal to another realm and enslaved by dragons. But when he receives a cryptic message from his missing brother, he must uncover the truth and find the portal before it’s too late. At the same time, Koren, a slave in the dragons’ realm, discovers she has a gift that could either save or help doom her people. As Jason and Koren work to rescue the enslaved humans, a mystic prophecy surrounding a black egg may make all their efforts futile.

▼▲
In Bryan Daviss Starlighter, humanity has been separated and enslaved. In the human world, a tyrannical government has reduced the population to crushing poverty, while on a parallel planet, the world of dragons, humans are little more than sheep, servants to monstrous masters. Jason Masters life is crumbling in the human world as he loses both of his brothers to myths of another dimension that turn out to be all too real. At the same time, Koren, a slave girl to a dragon priest, discovers that she has been born with an incredible gift that can save her people. Together with the help of their friends, they must battle against the cruel dragons, as the looming fulfillment of an ancient prophecy threatens to destroy the human race.

Bryan Davis is back in his element with dragons, legends, and alternate dimensions. Longtime fans of the author will feel right at home with this latest installment; swords and special powers show up every other page. Gallant heroes traverse alternate dimensions and fend off vicious dragons. Prophecies (usually of the older-than-time-itself variety) crop up very frequently and always rhyme. It is unapologetically a fantasy book.

For all its clear fantasy elements, though, Starlighter is also a blatantly Christian story. Characters make a big deal of following the Code (the Bible, for those of you taking notes), and Scripture shows up frequently albeit worded differently (You shall know love when a man sacrifices for a pauper, etc.). There are several reverential references to the Creator Above. One particular character seems to represent the devil, although it is, as yet, pretty ambiguous. All of the heroes are unquestionably good (though sometimes good just means nice to other people), and even some of the bad guys end up being not-so-very-evil after all.

All that being said, this book of fantasy would not be especially fantastic for grown-ups. The plotting stumbles under its own weight at times, and some of the elements are a little overdone. Rhyming prophecies and bad-guys-who-become-good-guys may show up too often for some peoples tastes. Readers looking to get their dragon fix while they wait for the next Eragon book are not likely to find it here.

Even so, younger readers will eat this up, and discerning parents wont have to worry if their children are being exposed to the unsavory things becoming steadily more prominent in our culture. All of the messages here are scripturally sound: love one another (John 13:34), free the captives (2 Corinthians 3:17), and obey authority even when it is inconvenient (Romans 13:1). Anyone with a child who loves dragons but isnt quite up Eragons length and weight should be on the lookout for Starlighter and its sequels; expect many of them to start fighting dragons in the backyard, yelling For the Lost Ones!  Chandler Birch, www.ChristianBookPreviews.com

▼▲
Davis, Bryan (Author) Apr 2010. 400 p. Zondervan, paperback, $9.99. (9780310718369). Jason is an excellent swordsman who grew up pretending to slay dragons with his older brother. There have long been rumors of dragons stealing people to another realm and enslaving them, but Jason did not believe the myths. Now, both his brothers are missing, and it turns out that dragons really exist. Jason journeys to find the portal to this mysterious realm in order to rescue his brothers and free the slaves. Meanwhile, a slave girl named Koren has long thought that the myths about a planet where humans are free was a myth. She dreams of freedom but because she is a Starlighter, a powerful visionary, the dragons will never set her free. Told in alternating chapters, Koren’s and Jason’s stories merge as both use their gifts to battle the dragons and liberate the captives. Both are strong characters who readers will root for from the very beginning. The first in a planned four-book series, there is just enough of a resolution to satisfy readers, yet leave them eager for book two. --- Shauna Yusko -- Booklist

Jason Masters has heard many stories about, the Lost Ones, humans kidnapped by cruel dragons and forced to work as slaves in a parallel world called Starlight. All his life he has been training to slay dragons, even though he is not sure if they really exist. When Jason’s brother sends a secret message revealing that he used a portal to cross over from Darksphere (their home) into Starlight, Jason embarks on a quest to locate the portal and help his brother rescue the Lost Ones. Meanwhile, a Lost One named Koren learns that she is a Starlighter, a storyteller prized for the ability to entrance dragons with her tales. She has dreamed all her life of escaping to Darksphere. Together Jason and Koren battle dragons and take a group of Lost Ones through the portal to freedom. Jason and Koren’s stories are told in alternating chapters, weaving them together and setting the stage for the collaborative struggle at the conclusion of the novel. The conclusion wraps up the main storyline for the first installment of this new series; however, the novel contains a large cast of secondary characters, several of which seem to disappear as the story progresses. Fans of other Christian fantasy series such as Donita K. Paul’s The Dragon Keepers Chronicles (WaterbrookPress) will be eager to read this series. The religious message is subtle, so non-Christian fantasy fans may enjoy this novel as well. ---Amy Wykoff. VOYA August 2010 -- Amy Wykoff, VOYA

▼▲
I'm the author/artist and I want to review #1: Starlighter.
Back
Back