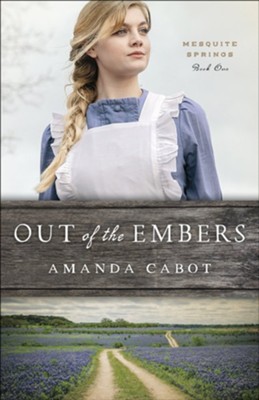 Out of the Embers, book one in the Mesquite Springs series, blends both romance and suspense in the Texas Hill Country in the 1850s.

When a fire destroys the orphanage where she worked, Evelyn Radcliff flees to the Texas Hill Country with an orphan in tow and a killer in pursuit. Will a rugged horse rancher hold the key to her future—and her past?

▼▲
Ten years after her parents were killed, Evelyn Radcliffe is once more homeless. The orphanage that was her refuge and later her workplace has burned to the ground, and only she and a young orphan girl have escaped. Convinced this must be related to her parents' murders, Evelyn flees with the girl to Mesquite Springs in the Texas Hill Country and finds refuge in the home of Wyatt Clark, a talented horse rancher whose plans don't include a family of his own.

At first, Evelyn is a distraction. But when it becomes clear that trouble has followed her to Mesquite Springs, she becomes a full-blown disruption. Can Wyatt keep her safe from the man who wants her dead? And will his own plans become collateral damage?

Suspenseful and sweetly romantic, Out of the Embers is the first in a new series that invites you to the Texas Hill Country in the 1850s, when the West was wild, the men were noble, and the women were strong.

▼▲
Amanda Cabot is the bestselling author of A Stolen Heart, A Borrowed Dream, and A Tender Hope, as well as the Texas Crossroads, Texas Dreams, and Westward Winds series. Her books have been finalists for the ACFW Carol Awards, the HOLT Medallion, and the Booksellers' Best. She lives in Wyoming. Learn more at www.amandacabot.com.

▼▲
I'm the author/artist and I want to review #1: Out of the Embers.
Back
Back