Skip to main content
SPRING CYBER EVENT STARTS NOW: And it's a really BIG deal! Up to 88% off through 5/24>
Merlin's Blade, Merlin Spiral Series #1
By: Robert Treskillard
Stock No: WW73507X 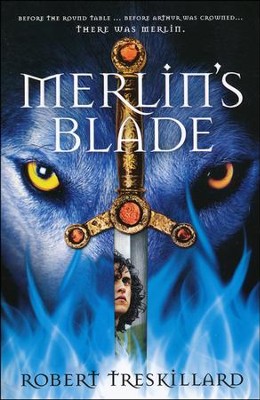 ▼▲
A strange meteorite. A deadly enchantment. And only Merlin can destroy it. A meteorite brings a mysterious black stone whose sinister power ensnares everyone except Merlin, the blind son of a swordsmith. Soon, all of Britain will be under its power, and he must destroy the stone---or die trying.

When a meteorite crashes near a small village in fifth-century Britain, it brings with it a mysterious black stone that bewitches anyone who comes in contact with its glow—a power the druids hope to use to destroy King Uthur’s kingdom, as well as the new Christian faith. The only person who seems immune is a young, shy, half-blind swordsmith’s son named Merlin.

As his family, village, and even the young Arthur, are placed in danger, Merlin must face his fears and his blindness to take hold of the role God ordained for him. But when he is surrounded by adversaries, armed only by a sword he’s named Excalibur, how will he save the girl he cherishes and rid Britain of this deadly evil ... without losing his life?

▼▲
Robert Treskillard breathes new life into the often-told tale of King Arthur and his faithful mentor, Merlin. Treskillard has managed to put a new spin on the story in this three-volume series called Merlin’s Spiral by focusing on Merlin’s story. In Merlin’s Blade, fifth century druids in Britain attempt to regain power, defeat King Uther, and destroy the Christian faith embraced by the people. A blind boy (Merlin) is the only one not bewitched by the meteorite’s blue flames used by the druids to entrap the people. How can a blind boy who is bullied, ridiculed, and criticized be the one to save Arthur, and overthrow the evil that controls the people of Britain? It is hard to believe that Merlin’s Blade was Treskillard’s first novel. It is a well-written epic fantasy, with an enormous amount of detail and character development. This series–a prequel to the King Arthur legend–will be of interest to epic fantasy readers and fans of Arthurian legends. There is a lot of action but almost too much detail about the violence (although it was a bloodthirsty time period). Recommended for public libraries and school libraries. Carol R. Gehringer, worthy2read.wordpress.com

Tell us a little about yourself.  I'm a native Minnesotan transplanted to St. Louis, MO ... and I don't miss the snow-shoveling or mosquitoes! I've been crafting stories from my early youth, but didn't start writing a novel until I was almost 40. I'm a software developer, graphic designer, celtic enthusiast, and have a B.A. in Biblical & Theological Studies from Bethel University, MN.

What was your motivation behind this project?  When my son was young, he wanted to learn blacksmithing and bladesmithing, so we set out to learn the crafts. In the process, my sister informed me that we were descended from a blacksmith who lived in Cornwall, England. This lit a fire in my imagination that welded together my Celtic research and my love for the legends of King Arthur, and a book was forgedMerlin's Blade, book one of The Merlin Spiral, coming April 2013 from Zondervan.

What do you hope folks will gain from this project?  There are many themes in Merlin's Blade, and in the entire trilogy, but one thing I want the reader to walk away with is a boldness to deal with the problems that they confronteven in the midst of weaknessin the same that Merlin must despite his near-blindness.

How were you personally impacted by working on this project?  To write a novel like Merlin's Blade, with such tragedy and triumph, I found myself walking alongside the characters in a way that I didn't expect, pouring my soul into them. I rejoiced with their victories, and wept with their sorrows, and I was a different person for having written it.

Who are your influences, sources of inspiration or favorite authors / artists?  Frank Peretti's thrilling novels were my first inspiration to write, and then Stephen Lawhead's historical fantasies opened my eyes to what can be done in that genre. If reader's find that my novels contain even a hint of the craft and mastery that those authors have, I'll be more than satisfied.

Anything else you'd like readers / listeners to know:  My website for the novels will have a contest were you can win your own Excalibur made by the author!