Skip to main content
Holding the Fort #1
By: Regina Jennings
Stock No: WW218931 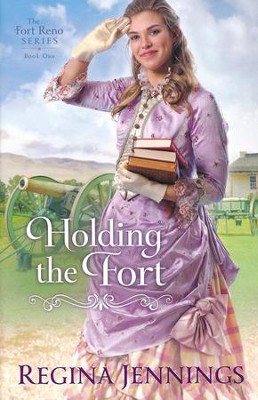 Louisa Bell is a dance hall who singer loses her job at the Cat-Eye Saloon. Her brother is a cavalry soldier stationed in Indian Territory. She goes to him for help and while there she is mistaken for a governess at Fort Reno. In need of a job, she takes the position working for Major Daniel Adams to teach and train his two teenage daughters. Taken by her good looks, Daniel turns a blind eye to her unconventional teaching methods. She must keep up this act long enough to help her secure the respectable future she has always wanted.

Louisa Bell never wanted to be a dance-hall singer, but dire circumstances force her hand. With a little help from her brother in the cavalry, she's able to make ends meet, but lately he's run afoul of his commanding officer, so she undertakes a visit to straighten him out.

Major Daniel Adams has his hands full at Fort Reno. He can barely control his rowdy troops, much less his two adolescent daughters. If Daniel doesn't find someone respectable to guide his children, his mother-in-law insists she'll take them.

When Louisa arrives with some reading materials, she's mistaken for the governess who never appeared. Major Adams is skeptical. She bears little resemblance to his idea of a governess--they're not supposed to be so blamed pretty--but he's left without recourse. His mother-in-law must be satisfied, which leaves him turning a blind eye to his unconventional governess's methods. Louisa's never faced so important a performance. Can she keep her act together long enough?

▼▲
Regina Jennings is a graduate of Oklahoma Baptist University with a degree in English and a history minor. She is the author of numerous novels, including For the Record, A Most Inconvenient Marriage, Sixty Acres and a Bride, and Caught in the Middle, and contributed a novella to A Match Made in Texas. She has won a National Readers' Choice Award and been a finalist for the Oklahoma Book of the Year. She now lives outside Oklahoma City with her husband and four children and can be found online at www.reginajennings.com.

▼▲
I'm the author/artist and I want to review Holding the Fort #1.
Back
Back