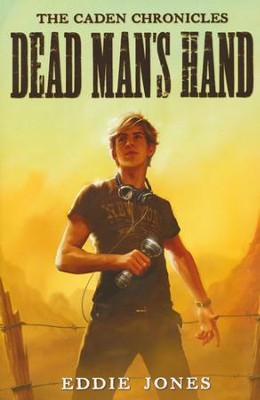 ▼▲
When Nick's family decides to go on vacation to a Wild West themed ghost town, he knows that he will be bored to tears. But when he witnesses a murder and the culprit vanishes into thin air, things start to get distinctly more interesting. Nick makes it his mission to find the killer, but shocking realizations about what's real and what isn't make solving the mystery difficult, and causes Nick to question everything around him including his faith. Could it be that this town is truly a ghost town?

It’s All Just a Show&hellip;Right?

"This is an authentic old west ghost town, son. Around these parts the dead don’t stay dead."

Nick Caden’s vacation at Deadwood Canyon Ghost Town takes a deadly turn toward trouble when the fifteen-year-old finds himself trapped in a livery stable with the infamous outlaw Jesse James. The shooter whirls, aims and&hellip; vanishes. Great theatrics, Nick thinks, except now he’s alone in the hayloft with the bullet-riddled body of Billy the Kid. And by the time the sheriff arrives, the body disappears.

Soon Nick is caught in a deadly chase—from an abandoned gold mine, through forbidden buffalo hunting grounds, and across Rattlesnake Gulch. Around every turn he finds another suspect. Will Nick solve the murder? Will his parents have him committed? Or will the town's infatuation with Hollywood theatrics conceal the real truth about souls, spirits and the destiny that awaits those who die.

Eddie Jones is the author of nine books and over 100 articles. He is a three-time winner of the Delaware Christian Writers Conference, and his novel, The Curse of Captain LaFoote, won the 2011 Selah Award in Young Adult fiction.  He is also a writing instructor and cofounder of Christian Devotions Ministries, and his He Said, She Said devotional column appears on www.christiandevotions.us. When he’s not writing or teaching, he can be found surfing in Costa Rica or some other tropical locale.