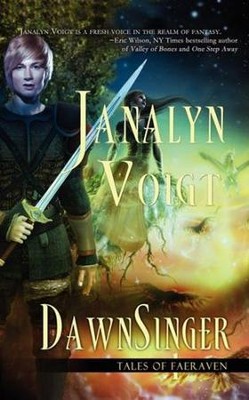 ▼▲
The High Queen is dying... At the royal summons, Shae mounts a wingabeast and soars through the air to the high hold of Faeraven, where all is not as it seems. Visions warn her of danger, and a dark soul touches hers in the night. When she encounters an attractive but disturbing musician, her wayward heart awakens. But then there is Kai, a guardian of Faeraven and of Shae. Secrets bind him to her, and her safety lies at the center of every decision he makes. On a desperate journey fraught with peril and the unknown, they battle warlike garns, waevens, ferocious raptors, and the wraiths of their own regrets. Yet, they must endure the campaign long enough to release the DawnKing'and the salvation he offers'into a divided land. To prevail, each must learn that sometimes victory comes only through surrender.

Tell us a little about yourself.  My father instilled in me a love of literature at an early age by reading chapters from The Wizard of Oz, Robinson Crusoe and other classics. I soon began creating my own stories, and eventually began writing them down. A teacher noticed my storytelling ability when I was 12, and his encouragement helped me identify a desire to write novels. On my own initiative, I read dictionaries, grammar books, and encyclopedias to expand my knowledge base and to learn story structures and the elements of the writing. As an adult I completed more formal training through Christian Writers Guild.

DawnSinger, my debut and first novel in the Tales of Faeraven epic fantasy series, released with Harbourlight Books in June 2012. Other projects include a western historical romance series. I serve as a judge for several national literary contests and am an active book reviewer.

In my spare time I read, garden, and find adventures with my family in the great outdoors. I dream of owning a horse, exploring all the national parks, and visiting European castles.

What was your motivation behind this project?  DawnSinger sprang from a story I told on the spur of the moment to entertain my young daughter during a drive. Long after she'd forgotten the story, the world of Elderland and its people remained with me. I had to write their epic story. That was a process that took years and even brought me back after I (thought I) quit writing.

What do you hope folks will gain from this project?  I offer escape from the drudgery of everday living into a world of beauty and danger. Being allegorical, DawnSinger also raises questions like what it means to surrender to God's will and when does honor supercede happiness.

How were you personally impacted by working on this project?  DawnSinger's message of sacrifice for the greater good has been the one I needed to learn myself to bring this novel to readers. Writing this book has strengthened my own resolve to live a life of honor.

Who are your influences, sources of inspiration or favorite authors / artists?  J.R.R. Tolkien's and C.S. Lewis's writings inspired me to write in the genre they helped create, although I have my own authorial voice. My training in opera, chamber singing, and musical theater influences my writing. When people describe my writing as lyrical or musical, I smile a little. At least right now, I don't sing outside of church, but I do sing with words.

Anything else you'd like readers / listeners to know:  I am available as a motivational speaker to church, womens, and writers groups with messages both inspiring and practical. Visit my website.