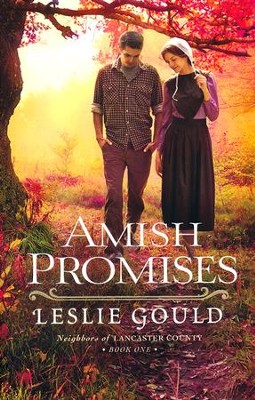 By: Leslie Gould
More in Neighbors of Lancaster County Series
Bethany House / 2015 / Paperback
5 out of 5 stars (33 Reviews) Write a Review
In Stock
Stock No: WW215087

▼▲
When Joel and Shani Beck arrive at their new home, they're looking for peace. Shani is thrilled to have Joel back from Iraq, but he needs time to heal, and the quiet of Lancaster seems just the place. They can't imagine any trouble with their Amish neighbors, the Lehmans, but things get off to a rocky start when their son is involved in an accident that injures one of the Lehman boyS.

Eve Lehman has run her brother's household ever since the death of his wife, but Tim's a stern patriarch. Despite his protests, she's drawn to the new neighbor, Shani, and the two begin to form a strong friendship forged on faith and family. Things seem like they've quieted down until Joel's single and handsome army friend Charlie catches Eve's attention--a man unlike any Eve has ever met. Suddenly life for both families becomes more complicated than any of them could have ever imagined.

▼▲
Leslie Gould is the author of the bestselling Courtships of Lancaster County series and coauthor, with Mindy Starns Clark, of the #1 bestselling The Amish Midwife. She holds an MFA in creative writing from Portland State University and has taught fiction writing at Multnomah University as an adjunct professor. She resides with her family in Portland, Oregon.