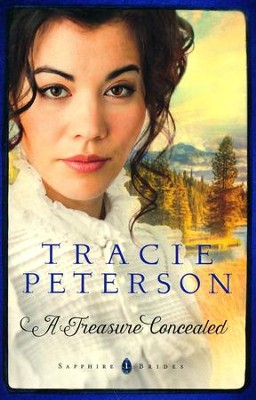 A Treasure Concealed #1, of the Sapphire Brides collection by Tracie Peterson

So much promise lay in the gold mining camps in Montana. But would it pan out? Emily Carver has her doubts, despite her father’s insistence. But when Caeden Thibault arrives on the scene in search of a quiet life, Emily thinks there might be treasure to be found after all.

Emily Carver wants a home where she can put down roots instead of following her gold-hungry father from one mining camp to another. She also longs for tenderness and love, both of which are missing in her life. Yet when she realizes she's losing her heart to the intriguing new man in camp, she fiercely fights her feelings, afraid that love will only result in disappointment and heartache.

Caeden Thibault, a young geologist, comes to Montana to catalog minerals indigenous to the state. He's a serious and guarded young man trying to escape the pain of his past. He has avoided all romantic entanglements, fearing he might become like his abusive father. But something about Emily Carver has caught his attention, something he never expected. . . .

Will these two broken souls allow God to bring healing and hope to their hurting hearts?

▼▲
Tracie Peterson is the bestselling, award-winning author of more than 100 novels. Tracie also teaches writing workshops at a variety of conferences on subjects such as inspirational romance and historical research. She and her family live in Belgrade, Montana.

▼▲
I'm the author/artist and I want to review #1: A Treasure Concealed.
Back
Back