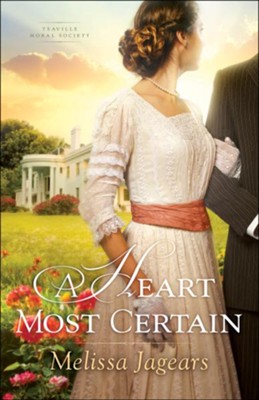 A Heart Most Certain #1

By: Melissa Jagears
More in Teaville Moral Society Series
Bethany House / 2016 / Paperback
5 out of 5 stars for A Heart Most Certain #1 (68 Reviews) Write a Review
In Stock
Stock No: WW217517

A Heart Most Certain #1, in the Teaville Moral Society series, by Melissa Jagears

Nicholas Lowe wants to help others, but prefers to keep his charity private and refuses. What complications do their actions do to the town?

▼▲
A Fresh Voice in Historical Romance!


While Lydia King's reasons for joining the Teaville Moral Society might be suspect to some members, her heart is in the right place. Because of her father's debts and her mother's persistent illness, her best chance at a secure future and curing her mother is to impress the politician courting her. Her first task--to ask the town's wealthiest man to donate--seems simple enough . . . until he refuses.

Despite appearances, Nicholas Lowe wants to help others, but prefers to keep his charity private. When Lydia proves persistent, they agree to a bargain, but Nicholas still intends to do things his own way. Neither predicts what they'll learn about true charity or foresee the complications their actions will bring to the town, forcing Lydia to decide where her beliefs and heart truly align.

▼▲
Carol Award-winning author Melissa Jagears is a homeschooling mom who writes Christian historical romance into the wee hours of the night. She's the author of the Unexpected Brides series and Love by the Letter, a free prequel ebook novella. You can learn more about Melissa, her books, and where she hangs out online at www.melissajagears.com.

▼▲
I'm the author/artist and I want to review A Heart Most Certain #1.
Back