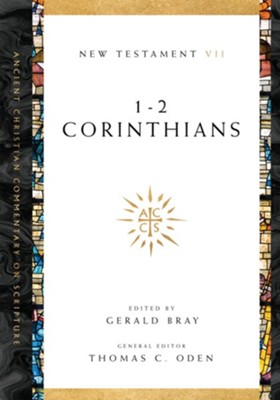 In Paul's letters to the Corinthian church, the pastoral issues of a first-century Christian community stand out in bold relief. And as the apostle responds to these challenges, the fathers lean over his shoulder, marveling and commenting on his pastoral wisdom. Best known among these patristic commentators is Chrysostom, whose seventy-seven homilies on the two Corinthian epistles are a treasury of exposition and application. The fragmentary works of Didymus the Blind and Severian of Gabala give us samples of Greek exegesis from the Alexandrian and Antiochene schools. The partial work of Theodore of Mopsuestia was long valued in the church, and the comments of Theodoret of Cyr are notable for their sensitivity to the intertextuality of Scripture. Then there are Origen and Pelagius, whose notable errors need not obscure their brilliant insights into Scripture. But pride of place in this volume goes to the unknown fourth-century commentator now dubbed Ambrosiaster. His excellent commentary on 1 and 2 Corinthians was previously unavailable in English translation. This Ancient Christian Commentary on Scripture volume opens a whole new way of reading these New Testament texts. The pastoral and theological interpretation of the fathers offers spiritual and intellectual sustenance to those who would read Paul again with open minds and hearts.

Gerald L. Bray (PhD, La Sorbonne) is a professor at Beeson Divinity School of Samford University in Birmingham, Alabama, and director of research at Latimer Trust. He has written and edited a number of books on different theological subjects, including Galatians, Ephesians in the Reformation Commentary on Scripture series, Biblical Interpretation: Past and Present, and The Doctrine of God. A priest of the Church of England, Bray has also edited the post-Reformation Anglican canons.