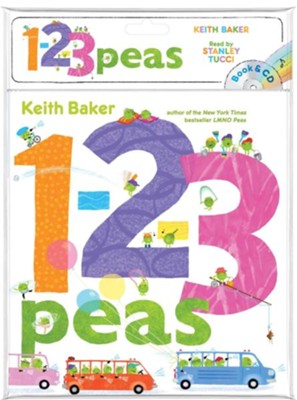 Meet the peas—the 1-2-3 Peas! Read along with the enclosed CD as Stanley Tucci narrates this fresh and fun counting book. Bright, bold numbers and playful peas abound in this book and CD package. These tiny green mathematicians will have young readers everywhere calling for more peas, please!

Italian American actor Stanley Tucci was born in New York in 1960. He has directed five films and appeared over seventy films, including The Devil Wears Prada, Easy A, The Terminal, and Road to Perdition, as well as more than a dozen plays, on and off Broadway. He starred in Julie & Julia, opposite Meryl Streep, and The Lovely Bones, for which he earned his first Academy Award nomination, for Best Supporting Actor. He is the winner of two Golden Globes and two Emmys. Tucci’s foody TV show, Stanley Tucci: Searching for Italy, recently aired on CBS and is nominated for an Emmy.