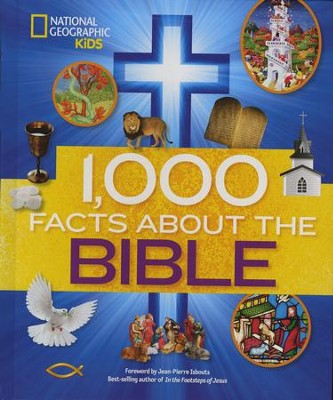 PLEASE NOTE: This book is not written from a conservative/evangelical perspective, so while facts are given as presented in the Bible, the introduction notes that "it's up to you how you will use biblical stories in your life" and presents different ways people use the Bible.

▼▲
This beautifully illustrated, easy to follow reference inspires kids to discover more about the Bible, with its unique presentation of historical stories and facts. Packed with features like "25 Facts about Music and Poetry" and "35 Facts about Ancient Rulers," and dozens more on palaces, beauty, gardens, fashion, and other aspects of life during biblical times, 1,000 Facts About the Bible is an engaging and kid-friendly take on the history, archeological discoveries, and stories of the Bible.

▼▲
NATIONAL GEOGRAPHIC KIDS inspires young adventurers to explore the world through award-winning magazines, books, website, apps, games, toys, television series and events and is the only kids brand with a world-class scientific organization at its core.JEAN-PIERRE ISBOUTS is a humanities scholar and graduate professor in the doctoral programs at Fielding Graduate University in Santa Barbara, California. He has published widely on the origins of Judaism, Christianity, and Islam, including the bestseller Biblical World: An Illustrated Atlas; Young Jesus: Restoring the “Lost Years” of a Social Activist and Religious Dissident; From Moses to Muhammed; The Shared Origins of Judaism, Christianity and Islam; and The Mysteries of Jesus. An award-winning filmmaker, Isbouts has also produced Charlton Heston’s Voyage Through the Bible, The Quest for Peace, and Young Jesus.

▼▲
I'm the author/artist and I want to review 1,000 Facts About the Bible.
Back
Back